Fresh from a West coast “Ten Cent Talkers Tour,” and an appearance at AmericanaFest in Nashville, guitar-slinging, singer-songwriter Johnny “Chops” Richardson has announced an end-of-the-year run from December 6-27.

Before his recent show at Sundown at Granada, Johnny caught up with the Dallas Observer to discuss the genesis of their infectious Delta-blues influenced, guitar-driven rock which hits a peak on the pointed anthem, “Ten Cent Talkers,” (fortuitously ahead of the midterm elections).

“It’s a fun listen, as Chops often interweaves supernatural themes with western motifs to create a Wild West death vibe. If Tom Petty, Muddy Waters, Clint Eastwood and Tim Burton formed a band, you might get a song like “Believer,” an edgy rock ‘n’ roll tune bathed in superstitious rituals.”

Logging 100-150 dates per year, playing solo shows and touring throughout the U.S. with Randy Rogers Band, with whom he’s played bass since 2002, Richardson will be on the road through the end of the year, as RRB loops from Texas to Boston and back, sharing select bills with Wade Bowen, Tracy Byrd, Cory Morrow, and Turnpike Troubadours. 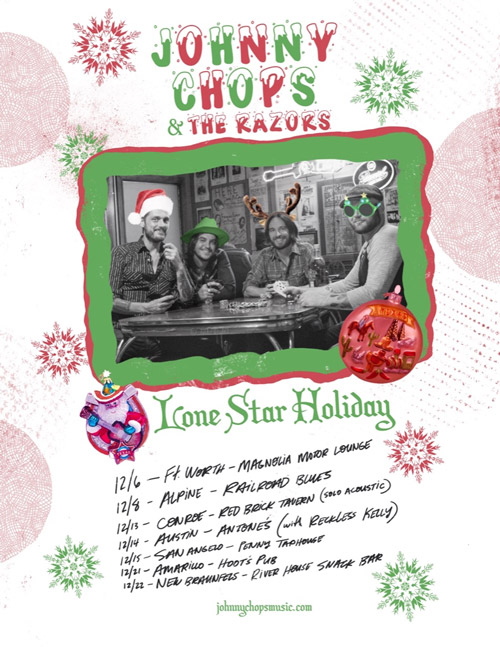