To everything there is a season. For Paul Kelly, it’s time to get the electric guitar out of the case to create one of the most powerful albums of his career.

That’s Life Is Fine — due out in North America on Gawd Aggie/Cooking Vinyl via The Orchard on August 11, 2017 — in which Kelly fires up with a band of long-time musical friends, captures all the excitement of them playing live in the studio, and delivers a record that crackles with an energy that is reminiscent of his finest ’80s recordings.

Paul enjoys touring and in support of the new album, he will tour the continent with a full band — his first such North American tour in 13 years, since the Ways & Means album.

Sonic diversity rules on the new collection, from the R&B grooves in the sizzling opener, “Rising Moon,” to jumping rockers (“Firewood and Candles,” “Rock Out on the Sea”), to fun tracks (“Leah: The Sequel”) to exquisite and rich tunes (such as “Letters in the Rain,” “Petrichor”). Life Is Fine is one of Kelly’s strongest and most evocative albums, another treasure to sit proudly on the shelf beside any of his earlier classics. 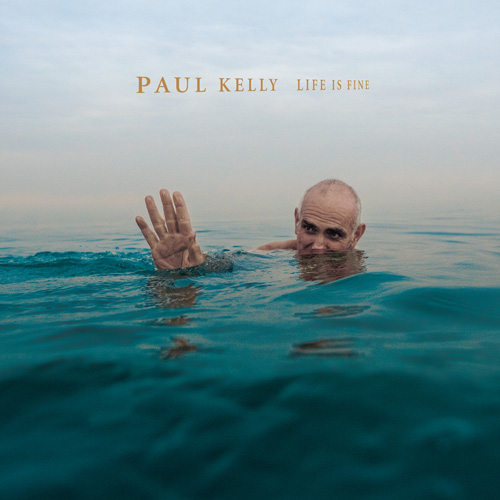 Kelly agrees about the comparison with those albums he made with the Messengers, such as Gossip and So Much Water So Close To Home. “I was aware of that as we were making it,” Kelly says. “The guitar riff at the start of “Firewood and Candles” (the first single/focus track) is like a Sunnyboys song. Those kind of guitar lines, nothing fancy but really strong, are like the ones Steve Connolly used to play with the Messengers. I can see a lot of parallels to those records I was making then.’’

Life Is Fine features some guest vocalists via powerful singers Vika and Linda Bull. “I wonder why I hadn’t thought of it sooner, to have another voice on my records besides mine. A lot of my favorite bands have that. The Stones have Keith Richards, the Velvet Underground had Nico. Vika sings “My Man’s Got a Cold,” which has a Bessie Smith attitude. “Don’t Explain” is sung by Linda. It’s at least 25 years old. I have been trying to get a woman to sing it for that long.”

“I knew I wanted it to be an upbeat record,” Kelly says. “We worked with Steve Schram, who engineered and co-produced. He likes to work really fast and get the performance of the band live in the studio, vocals and all at the same time. There are lots of different ways to make records but that’s the way I like to do it now.’’  Featured musicians include Ashley Naylor on guitar, Bill McDonald on bass, Cameron Bruce on keys and Peter Luscombe on drums.

One of the reasons behind Kelly’s enduring power as a songwriter is his continual drive to break old habits and find new ways to refresh his creativity. A massive songwriting breakthrough for Kelly came after writing his autobiography How To Make Gravy.

“Five years ago I was asked by the Australian National Academy of Music to write a song cycle for their students with a modern classical composer. This was after I had spent a couple of years writing a book and in that time I had hardly written a song. I felt rusty. I started looking at poems with a linking theme, which is how the show and the album Conversations With Ghosts (currently not available in North America) came about with James Ledger.

“That turned a little key for me. Until that point the music had always come first. I thought putting music to a lyric wouldn’t work, that it might be too stiff or control the music too much. I was wrong about that. Now, just for fun, I like to find a poem and have a go at putting music to it. It has given me another arrow in the quiver as a songwriter and it came along at a good time after writing songs for 30 years. When you have a beautiful set of words to begin with, whether it’s Shakespeare or Yeats or Les Murray, a lot of the hard work is done if you can write a good melody for it.”

“The lyric for the album’s title tune and concluding track, with lines like “If that water hadn’t been so cold I might have sunk and died,” sounds exactly like something Kelly would have written. Yet it is by the American poet Langston Hughes, who died in 1967. A friend of mine sent me the poem 18 months ago and it looked like a song lyric. Recording it we took a more folky approach, without drums, so I wasn’t sure if it would fit on this record. It was the lyric that helped get it over the line.”

Kelly continues, “At first I worried about Life Is Fine as a title because life is not fine for everyone. But I like the original meaning of fine, as in life is a fine thread. We never know what is going to happen the very next minute, or what is just around the corner.’’