Cindy Emch, the “Emchy” at the heart of the “Secret Emchy Society,” writes and performs “heartbreakin’ footstompin’ old-school country music.” As a fixture of seminal Bay-area Americana-inflected bands such as Vagabondage, Rhubarb Whiskey and The Oakland Wine Drinker’s Union, Emch is readying her official solo debut under the moniker Secret Emchy Society.

Yahoo! Music recently premiered the New Orleans/Carter Family-inspired, “Two Feet and a Dream,” the album’s lead track and first single. “Jagged Edges,” a duet with Canadian alt-country singer Tolan McNeil, will be released as the second single on July 13.

With turns that are happy, sad, heartbreaking and humble, The Stars Fall Shooting Into Twangsville will be released on July 21 with a show at Hotel Utah (1312 Utah St) in San Francisco on July 22.

On Diamonds, echoes of Bo Diddley’s primal shave-and-a-haircut rhythm careen through the opening “It All Ends Here” while “Statue Of Liberty” makes a very belated debut on record as the song was written 50 years ago. “Bohunk’s Daughter” bristles with rollicking Warren Zevon meets Memphis soul reverberations while 6-minute closer “Mike’s Last Will And Testament” flows from the storied storytelling well of Lou Reed and Van Morrison.

Rural Roots Music Commission anointed Diamonds and Televisions its “Album of the Year.” 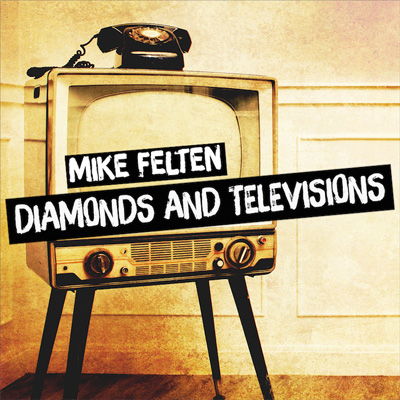 Connecting through an industry cohort, Emch and Felten will be meeting for the first time when they hit the road, though they actually already have a mutual connection. A mutual appreciation for the 1928 Louis Armstrong classic, “St. James Infirmary Blues,” a song based on an 18th-century traditional English folk song. Emch recorded it five years ago as a part of the anti-prohibition hellbilly goth collective Rhubarb Whiskey, which included the rendition on their Same Sad End EP. Felten, who’s been a fixture of the live music scene in Michigan, Wisconsin and Chicago since the 60s, has been playing the song for decades. On their co-headlining tour, they’ll musically accompany one another, with a grand finale on “St. James.”
Secret Emchy Society & Mike Felten