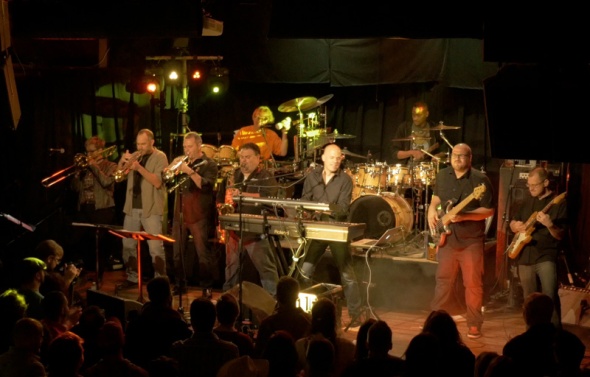 Here’s an excerpt from “Funked up“:

“Some of the many standout tracks include the brass-filled, guitar-heavy grooves of “Whatcha Gonna Do,” a track about knocking the dust off an old romantic relationship, and “Eyes of Mine,” a song that showcases the band’s myriad musical talents from keyboards to sharp percussion, but also covers some heavy lyrical content about the difficulty of facing reality.

Newcomers to the Phunktion sound will be drawn to a number of songs on the tail end of the album, including an excellent cover of the Earth Wind & Fire classic “Jupiter,” as well as the band’s strongest jams, like the personification of our fair city in “Miss Madison” and “Well Run Dry,” a no-holds-barred cascading hit about the perils of party life.”

The band will be busting out the full-on funk this fall with a couple of headlining shows, hitting TosaFest in Wauwatosa, WI on Saturday September 9 and anchoring their annual Funk Out Cancer benefit on Saturday November 4 at the Majestic Theatre in Madison.

Founded in 2009, Funk Out Cancer is a Concert and Silent Auction in Memory of Kate Gates Falaschi. All proceeds will go to fund cancer research at the University of Wisconsin Carbone Cancer Center.